Recently, we’ve seen quite a bit of discussion around the proposed Dogger Bank development – a man-made island to be constructed on the enormous shoal about 100 kms from the northeastern coast of England. There’s plenty of wind out there – and it’s relatively shallow. So locating a connecting base for electricity (up to 30 GW of it generated from offshore wind) to be shared among countries facing the North Sea is certainly an interesting idea. But is the idea as good as it seems?

Promising problem child
Despite its many good points, Dogger Bank has always been a bit of a problem. Undeniably, it’s a fantastic area – not only because its remote location makes it unlikely to encourage protests.

But it’s just not that easy. There are consented developments around Dogger Bank today, but without something radically new in the picture (like the proposed island), it is too expensive to source transmission lines from the individual wind farms. And that puts the price beyond today’s new norms. Understandably then, the industry has been more focused on developing other areas available closer to shore first and faster.

The Dogger Bank island is an opportunity well worth considering. For example, an island would allow multiple wind farms to easily be connected, requiring shorter cables from the farms to land. And the cables connecting the island to the mainland can be used not just to transfer wind power, but also for trading other forms of electricity among countries, too. Finally, O&M costs should be lower, given the ability to use the island for accommodation, parts storage and perhaps even some mobilisation or repair tasks.

The need for scale
It’s early days yet (the project wouldn’t be completed until around 2030 at best), but if it does go ahead, it will bring powerful long-term perspectives for the industry. In fact, I’d go as far as saying that a project like this is sorely needed.

That’s because one of the key challenges our industry struggles with is the fact that wind farm developments are primarily decided locally by local politicians – and their energy is received by local companies. But this doesn’t provide the flexibility needed for truly large volumes of power to be provided by offshore wind. To secure continued business and growth opportunities, and a healthy, market-driven industry, you need to be able to distribute power to several receivers at a time, and over long distances. And offshore wind needs to be fully integrated with the trading of other energy sources, such as hydropower being transferred from Norway.

From A2SEA’s perspective, for the offshore wind industry to really grow, the Dogger Bank island infrastructure – and more developments like this – is a must. It will enable us to sell wind energy at the right prices, and ensures the next stage and long-term viability of our entire industry. 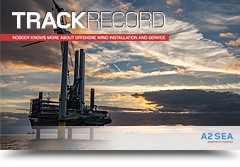