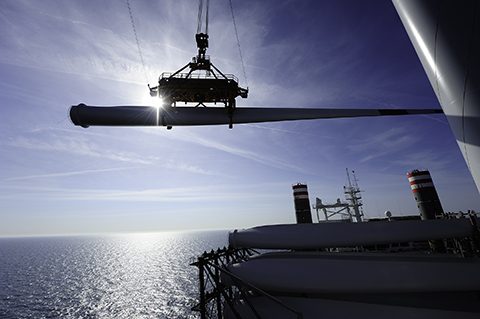 This is the third article in our series about reducing the LCoE in the offshore wind industry through optimising turbine loading, transport and installation.

A2SEA’s internal data supports wider industry observations that the cost of turbine installation per installed MW is, in fact, coming down. From our perspective (and remembering that turbine installation is a minor part of an wind farm’s overall development), there are gains to be made whenever we can load more megawatts at a time onto our vessels. This ability is strongly assisted by the increasing amount of power generated by larger turbines such as the MHI Vestas 8 MW. But that’s far from the full story.

In the way we equip and operate our vessels, we constantly try to increase how much cargo we can carry, i.e. the vessel’s loading capacity. Of course, larger payloads, reusable sea fastenings and the like. For example, as I’ve mentioned in earlier posts, we have just finalising the extension of our main crane booms to install taller turbines.

It doesn’t take an engineering degree to work out that a longer boom can’t lift as much as a shorter one, all things being equal. But the cranes on board SEA INSTALLER and SEA CHALLENGER were dimensioned to lift foundations, so we’re still operating at around half of their full capacity. By 2020, we expect turbine components to top out at some 550 tons, still leaving us with 150 tons of lifting capacity.

So what else happens when we attempt to carry a larger payload? With jack-up vessels, we have to consider the ability of the vessel to lift itself out of the water. So, for the past year, we’ve been working with GustoMSC, the manufacturers of our cranes and the vessels’ jacking mechanism, to address this issue.

When they were launched, SEA INSTALLER and SEA CHALLENGER could jack up with a total weight of 18,200 tons – and the payload promised to our clients amounted to 5,000 tons. During 2015, these figures increased to 19,200 and 6,200 tons, respectively. That might not sound like much, but if you look at it from a cargo perspective, that’s an increase of over 20 percent, which is quite an achievement. And we’re not stopping there: We are now working to increase the total weight to 20,500 tons, enabling the vessels to carry almost 50 percent greater payloads. By doing so, we’re able to extend the useful working life of our vessels, too, which is all part of further reductions in the LCoE.

If it were as simple as squeezing more onto our vessels, A2SEA could confidently promise reliable gains in the push to reduce the LCoE. But again, we’re a smaller part of the entire project. Costs are often driven up during the post-tender planning stage, fuelled by the client’s (understandable but expensive) desire to build in multiple contingencies and redundancies. And unforeseen delays of many kinds can occur, despite the best of planning efforts.

Bigger components, longer booms, longer legs, greater payloads – it all keeps our engineers constantly on their toes. In my next post, I’ll discuss some of the challenges and opportunities of re-arranging our precious cargo on deck. It’s a puzzle of enormous proportions, and we’ve become adept at solving it, often in unexpected ways!